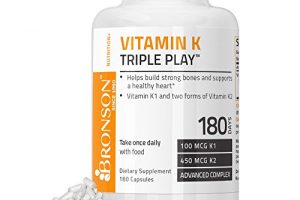 Feature:
Vitamin K consists of a group of structurally-similar, fat-soluble vitamins, vitamin K1 and vitamin K2, which are essential for helping build strong bones and providing support for a healthy heart.* Discovered in 1929, vitamin K was originally identified for its role as a coagulation cofactor. In the 1970s, vitamin K-dependent proteins were discovered, which showed vitamin KÕs role in bone and cardiovascular health. Phylloquinone, also known as vitamin K1, occurs in plants. Vitamin K2 is a range of K2 forms collectively referred to as Òmenaquinones,Ó which are distinguished by a number designation according to the number of repeating 5-carbon units in its side chain. While both vitamin K1 and K2 are beneficial to the body, only vitamin K2 is available to and utilized by soft tissues and systems beyond the liver due to its molecular structure. Vitamin K2 has also been shown to be more bioavailable and remain biologically active in the body longer than vitamin K1. Bronson Vitamin K Triple Playª is a full spectrum vitamin K complex that provides multiple forms of vitamin K, including vitamin K1 and two forms of vitamin K2, and is formulated to help build strong bones and support a healthy heart.* Vitamin K Triple Playª is provided in easy-to-swallow capsules, which supply a total of 550 mcg of vitamin K1 and vitamin K2. Each daily serving delivers 100 mcg vitamin K1, plus 450 mcg of two different forms of vitamin K2: Menatetrenone-4 (MK-4) and Menaquinone-7 (MK-7).

* These statements have not been evaluated by the Food and Drug Administration. This product is not intended to diagnose, treat, cure or prevent any disease. 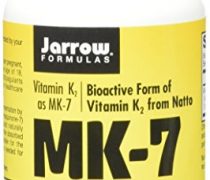 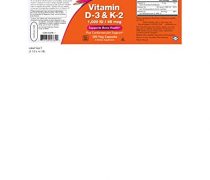 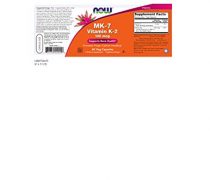 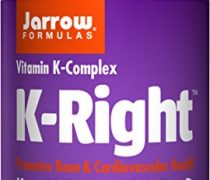 Cycling prevents muscles and the immune system from aging986 Views

How to live to 101: Six easy steps that will lead to a longer and healthier life967 Views